The 18th annual Vancouver Estival Trivia Open (VETO) was held on Saturday, August 6, 2016, at the University of British Columbia.

This was a guerrilla-style tournament, meaning that all questions were written by members of the participating teams, and there was no central editing. Or that was the intent, anyway: only one team came with a packet of questions, and the other teams were made up of people who wanted to play VETO but didn't find the time to write any questions. Fortunately, we had enough question packets from the mirror tournament (VETO's Eastern Trivia Open: full stats available) being held the same day at the University of Toronto.

Thanks to Mischa for getting us space at UBC. We ended up needing only one room. The whole tournament took place in Buchanan D221.

We had three teams:

In VETO's 18-year history in Vancouver, this year we set several records:

With one packet by the FARSIDE team, and 8 packets received from Toronto, we decided to play a triple round-robin, which would use all 9 packets.

So after the first round-robin, every team had a 1-1 win-loss record.

Things were going so slowly at this point that we decided that we wouldn't have time to do a triple round-robin, but would instead end the tournament after a second round-robin.

The last game would be between Taming of the Sandshrew and FARSIDE. If Taming of the Sandshrew were to win that game, it would have an overall 3-1 win-loss record, compared to 2-2 for Master and Charmander, and 1-3 for FARSIDE, so it would become the winner of the tournament. But if FARSIDE were to win that game instead, all three teams would have the same 2-2 record.

The last game (and hence the tournament) was decided on the last bonus, as Taming of the Sandshrew's correct answer to the last tossup put it just 5 points behind FARSIDE. The entire FARSIDE team walked out of the room because they couldn't handle the tension. However, Taming of the Sandshrew failed to get any points on the bonus, so the result was:

Since every team had the same 2-2 win-loss record, it was agreed that every team won. 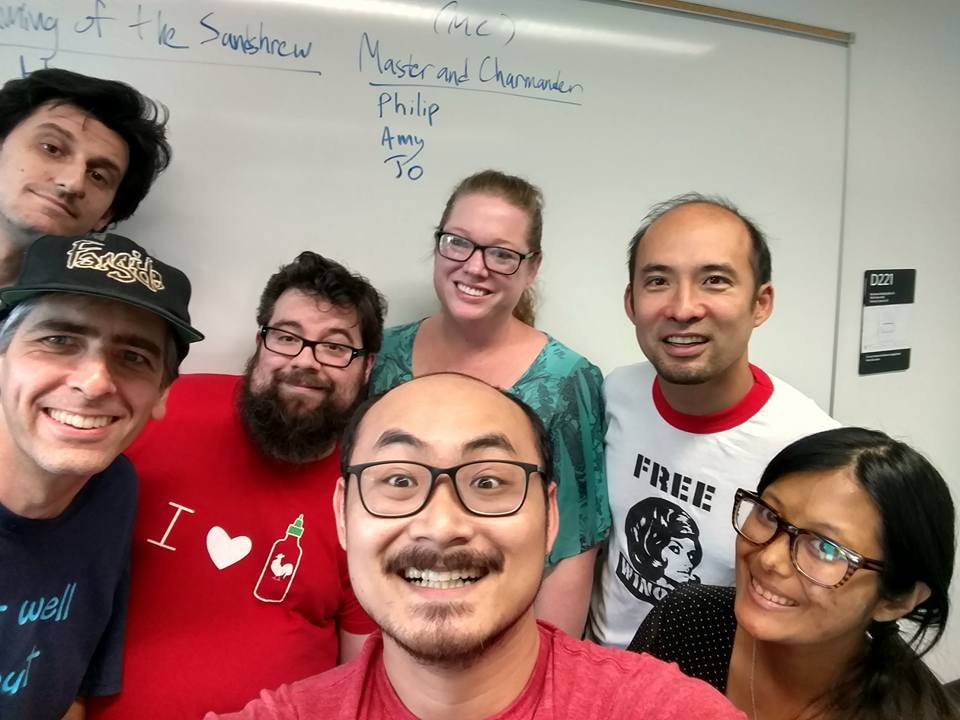 Here are the standings for the double round-robin (full SQBS tables are available).

Here is how individual players ranked on tossups in the double round-robin. The last seventeen columns indicate in which of the seventeen previous VETOs the person had played (Y if yes, or M if in the mirror in Ontario).

Some players received prizes. Unless otherwise indicated, honourees were selected by the sponsor of each prize.