The sixth Trans-Canada Championship Match was held over the telephone on Saturday, July 15, 2006. The two teams had just participated in that day's two Canadian tournaments:

Thanks to Victoria Groce and Bruce Saunders for writing the questions, and to Robert Schmidt for moderating.

The game was untimed, with 20 tossups.

The moderator, Robert Schmidt, was in Cleveland, Ohio. He was connected to both Vancouver and Toronto by a three-way call, which I believe was made from Toronto.

Last year we tried to use JoeQuiz, but it didn't work. This year, we tried JoeQuiz again, and after at least half an hour of tinkering, we got it to work, but unfortunately it crashed after every tossup. Since that was no fun, after two tossups played with JoeQuiz, we reverted to the older method for the rest of the game.

Both teams had speakerphones and buzzer systems. The moderator didn't seem to have much difficulty determining which site was the origin of the first buzz.

Those of us who have been running Trans-Canada Championship Matches over the years unfortunately keep forgetting that the game would go more smoothly if we were serious about imposing certain rules during the reading of tossup questions:

Following these rules strictly will also make listening to the game easier.

An audio recording of the match has been saved on the Internet Archive.
Listen to the match (duration 50:34) in format: 128Kbps MP3, Ogg Vorbis, 64Kbps MP3. 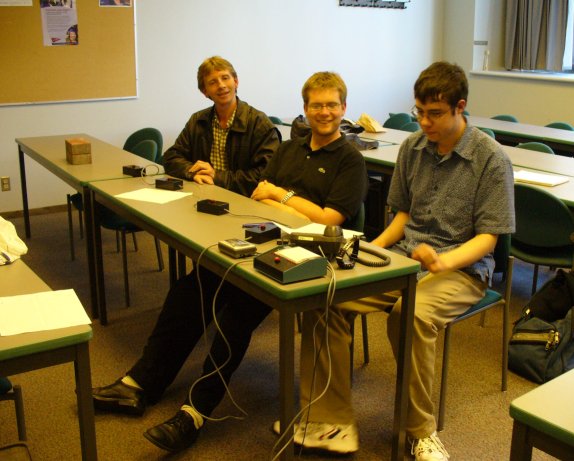 UBC Pseudo. Left to right: Richard, Brendan, Daniel. Teammate Angus was unable to participate in this match; a pair of bricks from an earlier tactile bonus sit at what would have been his position at the table.